The critical role of pumps in the Thai cave rescue When 12 boys and their assistant soccer coach were found alive by rescuers inside a Thai cave nine days after they went missing, up to 2000 volunteers mobilised to the site to offer their expertise. Despite the dangerous conditions, eight days later they had all been extracted from the cave system safely. Critical to the success of the rescue was the use of water pumps to keep the water levels low enough to allow the divers to guide the boys and the coach out of the cave.

How did they get trapped?

The junior soccer team, aged between 11 and 16, disappeared in the Tham Luang cave in Thailand’s Chiang Rai province on 23 June 2018. They had been exploring the cave when heavy rainfall flooded the tunnels, cutting off the exit and forcing them to travel deeper into the cave to safety.

The team’s disappearance triggered an international rescue operation, and more than a week after they went missing, on 2 July 2018 two divers found the group alive four kilometres into the cave system in a partially flooded chamber and huddled in total darkness on a 10m² ledge. 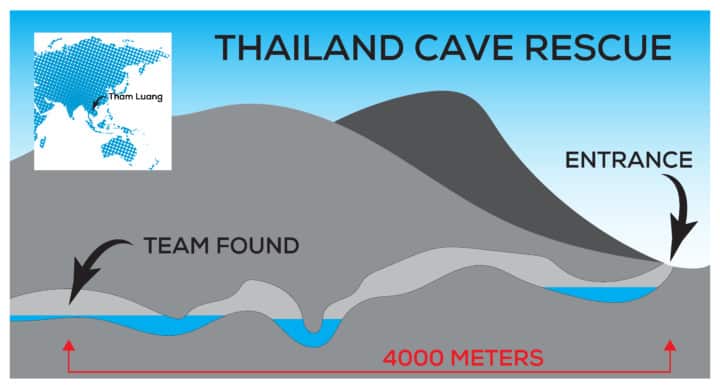 The Tham Luang cave system is among Thailand’s longest and is made up of tunnels, slippery rocks and cliffs with sharp drop-offs. During the wet season, from around May-October, the cave is notorious for flooding, and a large warning sign tells people it is off-limits.

Rescuers were puzzled over how to extract the team through the murky water coursing through a network of tunnels, and a range of options were considered including divers guiding them out through the flooded tunnels, drilling a tunnel down to the team from above, and waiting until the waters subsided.

However, despite being the most dangerous option and the team having no diving experience, current and impending heavy rainfall forced the hands of the rescuers and the decision was made to have the team led out by experienced divers.

The risk of rising water in the cave posed a problem, not only to the team inside the cave, but also to the rescue team. Thailand’s Interior Minister, Anupong Paojinda, told reporters that the navy SEAL divers leading the search were seriously handicapped by muddy water that had filled some chambers to the ceiling. This was a major problem as they could only proceed when there was enough space between the water and ceiling so the divers were about to lift their heads above the water at points to see where they were going.

In order to rescue the team, pump engineers volunteered their expertise to pump water out of the cave system to reduce the water levels and help maintain them when it rained.

Among the engineers sent to the site, were teams from Kirloskar Brothers (KLB) and Xylem.

KBL was brought into the rescue because the company had experience pumping out flood water, having helped with rehabilitation efforts in Bangkok after the 2011 floods.

A KBL release said experts from its team were on-site from 5 July 2018 to offer “technical know-how and advice on dewatering and pumps involved in the rescue operation”.

The release also said the company offered to provide four specialised high capacity autoprime dewatering pumps, which were kept ready at Kirloskarvadi plant in Maharashtra to be airlifted to Thailand.

In a statement to the Mumbai Mirror, KBL expert Prasad Kulkarni said, “Our work was to remove water from the cave, which has sharp 90 degree turns. The incessant rainfall posed a huge problem as the water level just couldn’t recede.

“The generator-based power supply was erratic. So, we had to use smaller pumps. The cave is in a 20km² hill, which was dark and damp. Its topography is such that even scuba divers could not help at times.”

A team from Xylem also played a role assisting rescuers by boosting pumping power by 40 per cent Bloomberg reported.

In an interview in Singapore, Xylem Chief Executive, Patrick Decker, said, “When we heard the boys were found and began to see the visual imagery on TV of the water conditions and what it looked like in the cave, and I saw these hoses with water pouring out of them, I thought, ‘we need to get somebody there to be sure they’re getting maximum water out of these pumps.”

Mr Decker sent employees from Thailand and Singapore to the cave for an initial assessment, with experts from the US and UK flown in later to make recommendations on things like changing cabling layout and adjusting the flow of hoses to improve pumping power. 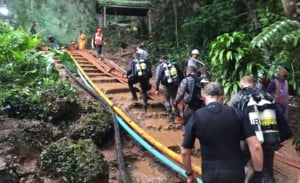 The Guardian reported that hundreds of industrial pumps – each with the capacity to drain 13,000 litres per hour – were brought in to drain the water in the cave system, with rescuers taking turns to ensure water was being pumped out 24/7.

In an statement to the Guardian, Poonsak Woongsatngiem, a rescue official with Thailand’s interior ministry, said the pumps had been able to reduce the water in the cave system by about 40 per cent in just a few days after the team was found, clearing a 1.5km stretch of dark, jagged and muddy cave channels that the boys would need to traverse.

Mr Woonsatngiem said, “We [are] target[ing] the water in the third chamber to reduce to the point that no diving equipment is needed, like to the waistline, so one can wear just life jackets and walk out.”

Clearing the third basin left another 2.5km of path for the team, with about half that remaining path walkable in the right conditions; the maximum water depth they needed to cross was about six metres.

With pumps situated both inside and outside the cave, an estimated 250 million litres of water was removed from the cave system over the course of the rescue effort.

The crucial role these pumps played in the successful rescue effort was highlighted on the final day of the rescue, when just hours after the last boy was brought out of the cave the main pump failed.

Rescuers were still more than 1.5km inside the cave clearing up equipment when the pump failed, resulting in the water levels rapidly increasing.

One of the Australian divers stationed in the third chamber told the Guardian, “The screams started coming because the main pumps failed and the water started rising. All these headlights start coming over the hill and the water was coming…it was noticeably rising.”

There were about 100 workers still inside the cave when the pump failed, but all managed to exit the cave safely less than a hour later.

The team was rescued in three groups spanning several days, with the first group exiting the cave on 8 July and the final group exiting 10 July, 17 days after they entered.

Following medical approval from Australian doctor Richard Harris, who entered the cave system to assess the team, an elite team of 19 divers helped bring the boys out, with each boy tethered to two experienced divers.

The boys and coach are now recovering in hospital and are reportedly in good health but will remain under quarantine until they are cleared of any infections they might have contracted while in the cave.

The rescue has been hailed a miracle, with Narongsak Osatanakorn, head of the joint command centre coordinating the rescue, thanking the international team for helping to get everyone out safely.

“Everyone worked together, regardless of race and religion, as the goal was the rescue of the youth football team and returning them home safely,” Mr Osatanakom said.

While the mission has been hailed a success, it is also tinged with sadness with the death of Saman Gunan, a former Thai navy SEAL, who died while laying oxygen tanks along the exit route.