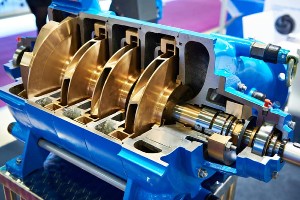 A look at Net Positive Suction Head Required (NPSHR) versus suction lift and self priming capability.

NPSHR vs Suction lift
Showing Net Positive Suction Head Required (NPSHR) on a pump’s performance curve is the most accurate and universal method of showing the pump’s suction capability because NPSHR is valid for any liquid, provided the liquid vapour pressure and density are known.

For cold water applications it is often considered more convenient to show the pump “Suction Lift” curve, as this allows an evaluation of the pump’s suction performance in a more tangible form. See figure 1.
It is important to realise that a Suction Lift curve is only correct for the particular liquid shown and will have been calculated on the basis of an atmospheric system at sea level (101.3 kPa abs). Normally cold water at 15oC is assumed.

For Water at 15oC, Suction Lift can be calculated from the NPSHR curve as follows :
Suction Lift (m) = 10.35 – NPSHR
It is also very important to understand that the Suction Lift values shown include all suction line losses which must be added to the difference in static liquid levels when assessing a pumping installation. Refer to figure 2.

Whilst the static lift (the difference between the liquid level and the pump centreline) is 2.0 metres, when the liquid is flowing there will be friction losses in the suction piping; in this example a 0.4 metre loss in the foot valve and a 0.3 metre loss in the rest of the suction piping. As the pump will also have to overcome these losses, they must be added to the static lift to obtain the Total Suction Lift.

Self Priming pumps will normally have their maximum Priming Lift capability detailed separately. As with the Suction Lift values, this will have been calculated on the basis of an atmospheric system at sea level (101.3 kPa abs). Normally cold water at 15oC is assumed.

The Priming Lift is normally significantly better than the pump’s suction lift capability in continuous operation. This is because the priming action is a short term function designed to draw liquid into the suction piping and pump casing during start up or after loss of prime.

Care must be taken not to confuse the Priming Lift capability with the Suction lift or NPSHR capability.
For continuous operation, the allowable Suction Lift (or NPSHR) remains the deciding factor for an acceptable pumping installation.

Reduction of suction lift with altitude and water temperature
At altitudes above sea level, the atmospheric pressure decreases, reducing the surface pressure on the liquid and hence reducing the Suction Lift possible.

Similarly, an increase in temperature will increase the liquid vapour pressure and hence reduce the Suction Lift possible.

See the following tables based on data in the PIA Australian Pipe Friction handbook.