When we start the pump selection process for a particular application, one of our major concerns is efficiency. If several different models of similar quality meet our conditions we will usually select the one with the highest efficiency. After all, higher efficiency reduces the cost of electrical power. There are times, however, when efficiency can take a back seat to the true, overall cost of operation.

Solids handling pumps used in municipal and industrial applications are a good example. Large sewage pumps can use mixed flow or radial flow impellers with little concern of plugging or clogging due to the inherent size of the flow passages. As discharge and vane size decrease, however, the potential for clogging increases.

In the early 1900s a new impeller design was developed by A.B. Wood of the New Orleans Sewage and Water board. Known as the ‘non-clog’ impeller, it consisted of two vanes with blunt leading edges that allowed the passage of larger solids and reduced the opportunity for stringy material to accumulate at the vane entry. Today, most solids handling pumps, with discharges smaller than 10”, utilise some variation of this design.

Those of us familiar with these pumps know that there is no such thing as a non-clog pump – ‘seldom clog’ is probably a better terminology. But, as discharge size decreases to 4” or smaller, ‘often clog’ can become the description of choice.

Now, some 3” and 4” pumps can pass a full 3” spherical solid, but some applications cannot accommodate the higher flows they produce and high concentrations of stringy material can still cause problems. If a small non-clog performs well in an application it is probably the best choice but, if plugging is a continual problem, you may want to consider an alternative.

The vortex pump, also known as a recessed impeller pump, is usually considered to be a member of the centrifugal family. This is not entirely accurate, but since there is no such thing as centrifugal force, it probably doesn’t matter anyway. It is, however, a dynamic pump as it imparts energy continuously to the fluid it is pumping.

Unlike the typical centrifugal pump, its pumping action is a two stage process. The impeller, which is located outside the flow area of the volute, produces a primary vortex or swirling action in the water that resides in and around its vanes. This vortex creates a secondary vortex in the volute that produces flow. Figure 1 illustrates this process.

The pumping action of the vortex pump offers several significant advantages. Since the impeller is recessed, it has little contact with the majority of the pumpage. Even when solids do contact the impeller, they do not have to traverse the vanes so the potential for erosion is greatly reduced. In addition to reduced wear, its recessed position also allows the passage of larger solids and stringy materials that might otherwise plug a true centrifugal pump. Almost any solid that can enter the suction will exit the volute and stringy materials pass through without entanglement. Still another advantage is a reduction in the radial forces that act upon its impeller. Because of this reduction, many vortex pumps can operate at very low flows or even shut off for extended periods without damage.

Unfortunately, that two-step pumping process also has a disadvantage – a much lower hydraulic efficiency. This trade off tends to be acceptable in many industrial markets but, unfortunately, it will often eliminate the vortex pump from consideration by some specifying engineers in the municipal arena.

Figure 2 compares a 4” vortex pump with a 4” non-clog. Both are rated to pass 3” spherical solids and reach their peak efficiency at the design point (450 gpm @ 46’). At this point the non-clog requires about 7.4 horsepower (efficiency = 70 per cent) while the vortex pump requires about 10.7 horsepower (efficiency = 48 per cent). Obviously, this almost 45 per cent increase in horsepower could have a rather large impact on long term electrical costs, but will this increase always make the non-clog the better choice? Lets take a look at a actual municipal example.

A small municipality in the western US installed a duplex lift station, with alternating 4” non-clogs, to service a retail complex. The complex consists of retail shops, a supermarket/department store, and several restaurants. The station has an average of six to seven starts per day and the run time for each cycle is approximately five minutes. In addition to normal human and food wastes, disposable diapers, feminine products, and high fibre paper towels are also a daily occurrence. This waste mix resulted in partially plugged pumps that had to be pulled for cleaning every seven to ten days. Late last summer, the non-clogs were replaced with 4” vortex pumps that produced similar head capacity characteristics. Since start up of the new pumps, no plugging has occurred. 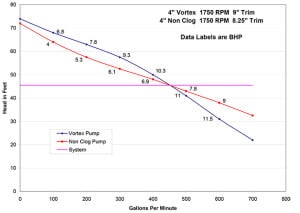 Although the vortex pumps consume approximately 38 per cent more horsepower than the non-clogs they replaced, the total power consumed is still relatively small since the pumps run no more than 35 minutes per day (213 hours per year). On the other hand, cleaning of the original non-clogs (over and above normal maintenance) required an average of 12 hours per month (144 hours per year). The replacement resulted in labor cost savings that far outweighed the additional electrical cost and, most importantly, made the pump station completely reliable.

There are times when we have to look beyond efficiency and its effect on electrical consumption, especially if operational hours are low. In the example above, and many more like it, overall cost and reliability can be far more important considerations.

Joe Evans accidentally entered the pump industry in 1986, and has been trapped there ever since! He is passionate about the sharing of knowledge within the industry. To read more of his insights into the world of pumping, head to www.pumped101.com.