If you’ve spent much time around water wells and other water pumping systems, you will probably have seen the devastating effect iron bacteria can have on a water supply system – and on your water source. What you may not know is that this costly problem can be easily avoided, simply by choosing the right components for your water supply system.

n a world of increased costs, we all search for ways to become more efficient in everything we do. When we see inefficiencies, we deal with them immediately and the result is savings and increased profitability. But what happens when we do not see inefficiencies? The cost of ignorance is immeasurable.

With a large percentage of the Australian population, livestock and industry presently dependent on groundwater, it is of interest for all of us to ensure the long-term sustainability of this most precious asset, water.

Pumping water from underground is a hidden operation. We cannot see the water, the pump or the drop pipe. We only see a surface tank or piping leading away from the well.

Out of sight, out of mind

Given that most of the equipment in a groundwater pumping operation is completely hidden, it can be easy to miss some of the problems that can occur and decrease the efficiency of a water pumping system.

Buildup of iron bacteria is one such common problem. Iron bacteria can present in a number of ways, including a strong, unpleasant smell or taste, stained or coloured water, and a sticky slime, typically rust in colour.

In water wells or groundwater pumping systems, one of the biggest challenges associated with iron bacteria is that it can significantly reduce the yield of a system by clogging up its pipes and equipment.

The other main problem with iron bacteria is that once it’s present, it can be very difficult to get rid of it. Treatment options include physical removal of any rusting of equipment that has occurred; and chemical treatment of water supplies. Both of these are costly options, and if the level of iron bacteria is high, may not actually be entirely effective.

How can the effects of iron bacteria be minimised?

Like many things in life, prevention of the problem is easier than the cure. This means making sure that pumps and all other equipment relating to your water system are sterile when installed, and only using appropriately licensed contractors to carry out works on your system.

If you’re installing a new submersible bore pump and water well system, it is important to review the components that make up your system to ensure they are not subject to the encrustation and blockage that iron bacteria causes. Encrustation and internal iron bacteria build up in the riser pipe leads to reduced flow rates and inefficient pumping. By choosing a flexible riser such as Flexibore Hose, there is no chance for iron bacteria build up inside the pipe,  due to the swelling characteristics of the materials used. The polyurethane flexes and hence does not allow the iron bacteria to build up, thus keeping pumping costs down. This is not the case with rigid risers made of steel, fibreglass or polypipe.

The Flexibore Hose ensures simple and effective bore water retrieval, mine dewatering and municipal water supply. It’s a flexible yet resilient layflat hose that can be installed with great ease compared with rigid pipes. 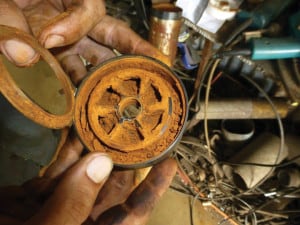 The effects of iron bacteria can be dramatic.

Nicolas Huvelle, an experienced agronomist in the Warialda NSW region, had a problem with not only his submersible bore pump clogging up with iron bacteria, but his fibreglass riser pipe too.

Flows were reduced by 15 per cent due to clogging within the pump impellers. Mr Huvelle ran the numbers and realised that the iron bacteria blockage was costing him $115 per week due to the inefficiency of his blocked system.

After doing some research, Mr Huvelle came to the conclusion that the capital cost of replacing his riser pipe with Flexibore Hose would quickly pay for itself thanks to the regained efficiency his unblocked pipe would offer. Most importantly, he wouldn’t have to worry about iron bacteria building up in the pipe again, as no iron bacteria could build up inside the riser. Another benefit was the fact that the pump could be easily lifted whenever the pump needed to be cleaned and the bore redeveloped.

Since installing the Flexibore Hose Mr Huvelle’s well efficiency has improved, resulting in lower running costs and less wastage of water and energy – all thanks to the choice of riser used. 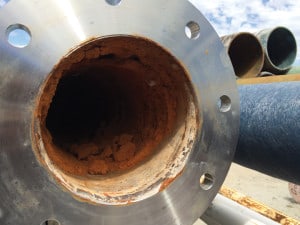 Iron bacteria in a fibreglass riser.

For more information on how Flexibore Hose can help you to avoid iron bacteria in your water supply system, contact Crusader Hose Managing Director Francois Steverlynck
on 03 9720 1100 or visit
www.crusaderhose.com.au.