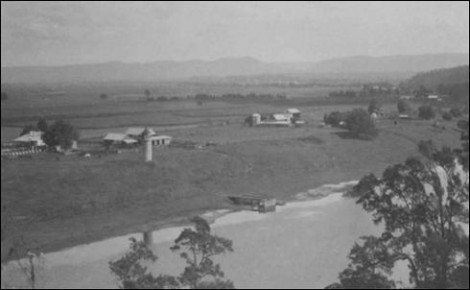 In our occasional series on pumping history, we look at the Riverfarm pumping station located at the University of Western Sydney.

The pumping station was constructed from reinforced concrete and is 3 metres wide in diameter and stands at 24 metres in height. The greater part of the tower has been buried below ground, leaving only 7 metres on the surface which can be seen. The structure extends deep into the riverbank to protect it from occasional flooding, keep the structure stable and the machinery dry. The pumping station machinery comprised of two sets of pumps, one for  the domestic supply and broad college use and the other for irrigation. Water flowed through suction pipes into electricity powered pumps at the base of the well to concrete storage reservoirs on the college grounds. In the late 1920’s a number of concrete tanks were built on the opposite side of the river bank to increase the water pressure in order to support the growing population. The pumping station supplied millions of litres of water to the local area, until 1939 when the supply ceased to the Hawkesbury Agricultural College and the Richmond Township.

The pumping stations design, if not its building type, is a very rare example of an early 20th Century reinforced concrete pumping station incorporating a tower and well. This significant structure undertaken more than 100 years ago brought life to the local region – providing water, producing food and assisting with education for three decades. Today the pumping station still remains standing at the Riverfarm, retaining many of its original features.

UWS also has this architectural drawing of the pump station.