Wastewater treatment is an integral part of the sustainable development of modern cities.  According to international water association (2017), only 20 per cent of all wastewater is treated globally. Meanwhile, this figure is projected to increase substantially by 2030 as part of the sustainable development goals, UN-Water 2017 theme. Additionally, factors including population growth, water shortage and stricter environmental regulations demand a considerable increase in the capacity as well as the efficiency of current wastewater treatment plants (Munro-Smith 2018).

Composition of sludge is subjected to seasonal change as such in rain season there is more water in the influent of a wastewater treatment plant or hot summer the sludge microorganisms are more active, and the biological treatments are more efficient (Mahmoud, Zeeman et al. 2004, Water Environment 2008).

To address this issue, we have determined the rheological variation of three types of sludge over one-year of measurements in a wastewater treatment plant in Melbourne, VIC using Herschel-Bulkley model. Figure 1 shows the relative variability of sludge rheology as well as its composition. It shows the extent of variability concerning the mean of data. 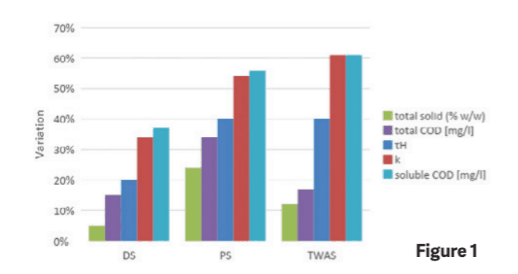 The design of wastewater pumping systems requires a reliable means of calculating pressure drop at various flow rates. But due to the complex behaviour of sludge (i.e. flow behaviour) which typically requires a few rheological parameters rather than a single ‘viscosity’ (Malkin, Masalova et al. 2004, Slatter 2004), pressure drop calculations are not accurate.

As the parameters increase in the model, the model becomes non-linear, while the predictions are more accurate, the fitting procedure and the pressure drop calculations become more complicated.

Common fitting software dealt with non-linear models (e.g. Herschel-Bulkley and modified Herschel-Bulkley) just like a minimisation problem defined with an objective function to be minimised at a value. As such, the operator can choose between different objective functions, algorithms as well as model equations which impact on the results (Dochain and Vanrolleghem 2001).

In contrast, for Bingham-Plastic model, there is an analytical solution derived by differentiating the objective function concerning the model parameters. It is worth noting that, some minimisation methods linearised the non-linear models to reduce the complexity of parameters estimation which leads to biased results.

Generally, in a curve fitting, the measured variables are assumed independent holding an identical normal distribution at each measured point. But this is not always the case. For sludge, we showed that the residual error of flow curve fitting where Herschel-Bulkley and Bingham models are used is not normally distributed and increases with shear rate. To make fitting better for this system, one solution is to give weighting to residual errors but to avoid subjective judgments; one can use robust algorithms. In a robust fitting, outlier data do not impact on the estimation of model parameters (MathWorks 2016).

Another approach is to cut the data posing large residual errors at the high shear rate where pumping system is not operated. In fact, no perfect algorithm exists for estimating nonlinear model parameters. Through residual analysis on a broad set of sludge flow curve data, the best scenario for sludge parameter estimation has been identified in Table 1 (Farno, Coventry et al. 2018).

Table 1: Regression scenarios with the best performance for each sludge sample.

To investigate the impact of variation of rheological parameters on pressure drop calculation, critical pressure drops (transition point from laminar to turbulent) was calculated by integrating Eq.1 to 3 in respect to a pipe radius (Eq.4) and using Re3 friction model.

Eq.4 has an analytical solution for α equals to zero, but the numerical approach is required for n and α ≠ 0.

Figure 2 presents the probability distribution of critical pressure drop calculation in a typical sludge pipeline (300m length and 100 mm diameter) when the model parameters vary in the 95 per cent confidence region.

By comparing the variation of the pressure drop because of variation of fitting parameters, it was shown that among the studied models, the Herschel-Bulkley model performed best (least standard deviation); it fits a reasonably good range of shear rates whereas it does not induce uncertainty over pressure drop calculations.

Whereas, modified Herschel-Bulkley fits better but produced massive uncertainty over the pressure drop calculation. Also, Bingham-Plastic model was shown unable to fit most sludge flow curve in addition to the wide variation in calculated pressure drop.

We also performed a sensitivity analysis to compare the impact of variation of each parameter on pressure drop calculation which showed for all models, k has the highest sensitivity (Table 2).

Table 2: Sensitivity analysis of pressure drop calculation (With permission from Water Research for this table published in Farno et al. 2018).

We have developed a gadget software for the industry to design and optimise pipeline systems. We adopted Re3 friction loss model which was successfully used in mineral industries to develop this new platform for sewage sludge.

Although a rule of thumb was adequate for calculating pressure drop, and the laminar-turbulent transition point in a dilute sludge pipeline, for sludge at high concentration which exhibits significant visco-plastic property, a precise calculation based on Re3 friction loss model requires. This adoption is based on the similarities between the rheological behaviour of thickened sludge and thickened mineral slurries.

The gadget was also made capable of fitting the three models to raw flow curve data by implementing the best regression methods mentioned above. It can predict pressure drop of a number of pipes at different diameters to estimate total pressure drop and provide the system curve for each pipe (Figure 3).

By utilising this gadget, engineers are not only able to use our specialised regression method to obtain rheological properties, but they can also visualise the laminar-turbulent transition point. So by this way, they can optimise the system to prevent laminar settling as well as inefficient heat transfer in heat exchangers which happens in laminar flow.

Another interesting feature of this platform is that it can predict the rheology of three types of sludge (anaerobic digested sludge, waste activated sludge and primary sludge) from its solid concertation and organic matter content using a fully trained model by experimental data.