Pumps at the heart of Australia Pacific LNG As Australia Pacific LNG picks up the pace on one of Queensland’s leading resource development projects a variety of pumping and pressure applications are playing a critical role in extracting, managing, compressing and transporting coal seam gas (CSG). 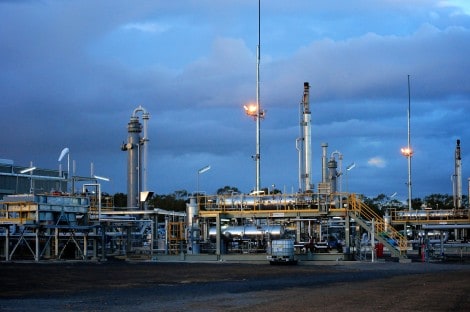 Australia Pacific LNG is the leading CSG producer in Australia. A joint venture between Origin, ConocoPhillips and Sinopec, Australia Pacific LNG is currently undertaking a major CSG to liquefied natural gas (LNG) project that will supply natural gas to both the domestic and international markets.
The $23 billion Australia Pacific LNG Project involves significant capital investment through to 2020 through the creation of a new, long-term gas processing and export industry in Queensland.
The construction phase of the Project will create 6,000 direct jobs, and a further 1,000 operational jobs, and brings opportunities to increase local skills and expenditure in regional economies.
The Project consists of three key parts:

The gas field development activities are located in the Surat Basin and the Bowen Basin regions of south west and central Queensland. Australia Pacific LNG’s CSG permits cover approximately 36,000 square kilometres in these regions, which are also home to cattle grazing and other farming activities.
Origin is responsible for drilling and gas field development, building on more than 15 years’ experience in developing CSG in south west and central Queensland. Gas field development will occur over four years and include up to seven gas processing facilities and two new water treatment facilities.
Origin has engaged specialist contractor MCJV Australia to construct the high pressure main gas transmission pipeline, which will be 42 inches in diameter and traverse 530 kilometres between the gas fields and Curtis Island.
The pipeline project involves construction of gas and water gathering pipelines in the gas fields, and a channel crossing from the mainland to the LNG facility on Curtis Island.
Construction and operation of the LNG facility on Curtis Island, including LNG production trains, storage tanks, loading facility and wharf, is being managed by ConocoPhillips.

The Project’s new 42 inch, 530km pipeline now under construction will connect Australia Pacific LNG’s gas processing plants with the new LNG facility on Curtis Island near Gladstone.
CSG will be pumped to the LNG facility where it will be chilled to -161 degrees Celsius and transformed into its liquid state. This liquefied gas is then ready to be safely transported to international markets.

Click here for more detail on how coal seam gas is produced and related pumping operations.

About the Australia Pacific LNG joint venture partners
Australia Pacific LNG is a joint venture comprising Origin, ConocoPhillips, and Sinopec.
Origin is Australia’s largest integrated energy company, is listed in the S&P/ASX 20 and has diverse operations spanning gas exploration and production, power generation and energy retailing to 4.4 million customers in Australia.
ConocoPhillips is an integrated energy company with global operations and a market capitalisation of around US$96 billion. It has over 40 years’ experience in LNG and 25 years’ experience in CSG.
Sinopec is Australia Pacific LNG’s foundation customer, with LNG off-take agreements for 7.6 million tonnes per annum over a 20 year period providing essential stability and reliability of energy supply. Sinopec is China’s largest petroleum products supplier and second largest crude oil and natural gas producer with a market capitalisation of around US$96 billion.