State of the Industry in 2016: adapt, diversify, survive Recently Pump Industry undertook the most comprehensive survey we’ve ever conducted in order to present a detailed analysis of the industry’s outlook for 2016.

After a challenging 2015, coming off the back of the depressed oil price and the global fall in commodities prices, we were keen to measure and understand our reader’s expectations for the year ahead. Are we expecting the challenges of 2015 to continue? Or is the mood more optimistic, thanks to new opportunities in water, wastewater and energy efficiency? 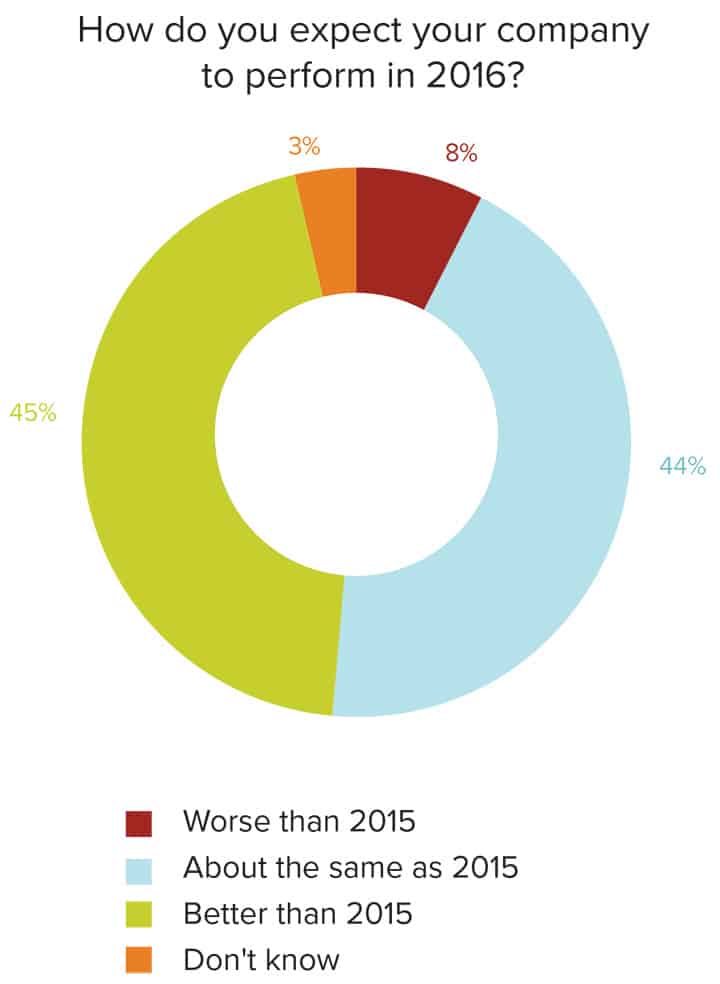 The discrepancy between personal performance and industry performance could be down to a number of reasons; perhaps our respondents are feeling more positive about their own ability to ride out the challenges of 2015 and prosper more in 2016. Or perhaps the difference suggests that the industry has a slightly less positive view of the broader industry’s performance which is not necessarily justified. 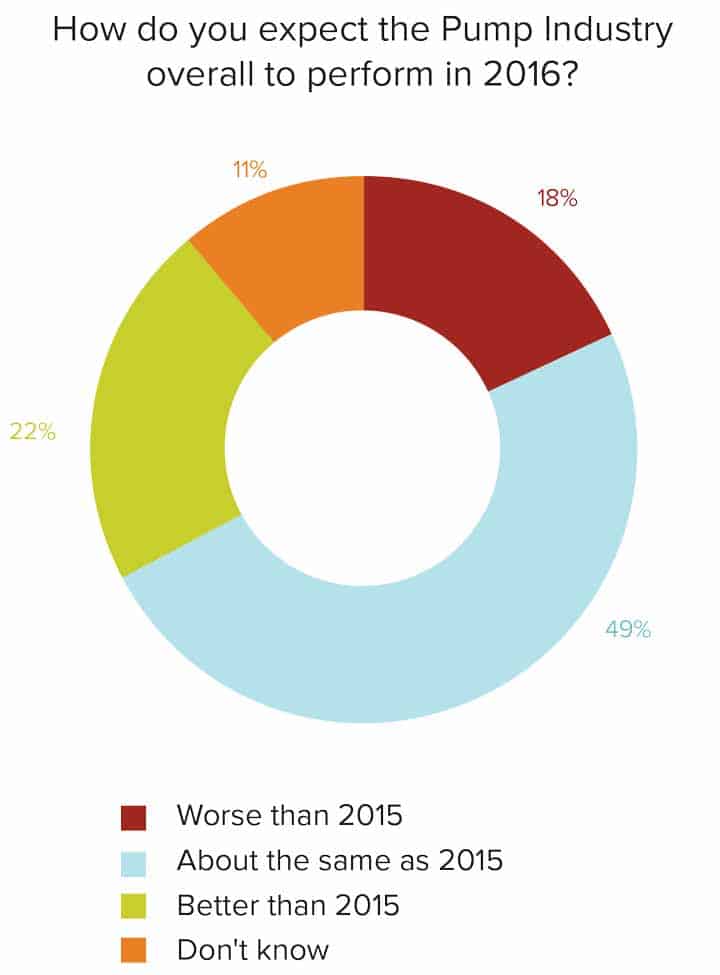 From this graph we can see that our respondents had a challenging year across a number of sectors, with those involved in mining the hardest hit. As for how our companies expect to perform in 2016, respondents believe that conditions will improve across a number of verticals. While it’s anticipated that the mining, plastics and rubber and pulp and paper sectors will continue to be challenging markets to operate in, our respondents believe in all other sectors their performance will increase or increase significantly. 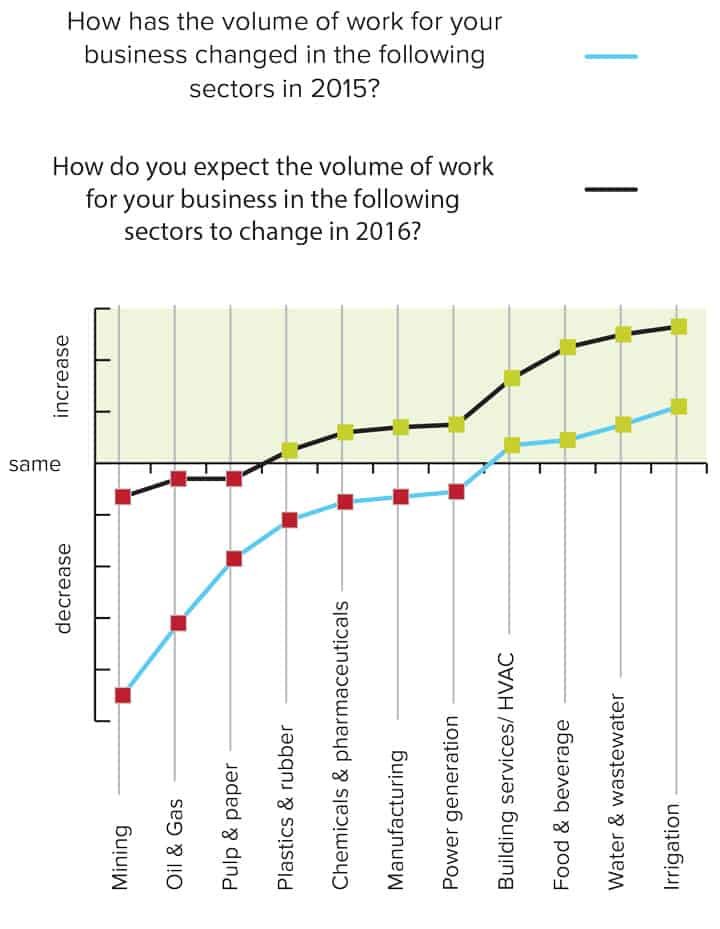 In particular, the irrigation, water and wastewater, food and beverage and building services and HVAC sector all seem poised to offer pump company’s significant growth – a trend which continued to present itself throughout the survey.

To gain an understanding of how macroeconomic conditions, such as the value of the Australian dollar, are impacting the Australian pump industry, we asked our respondents to describe their positive or negative impact on the industry. 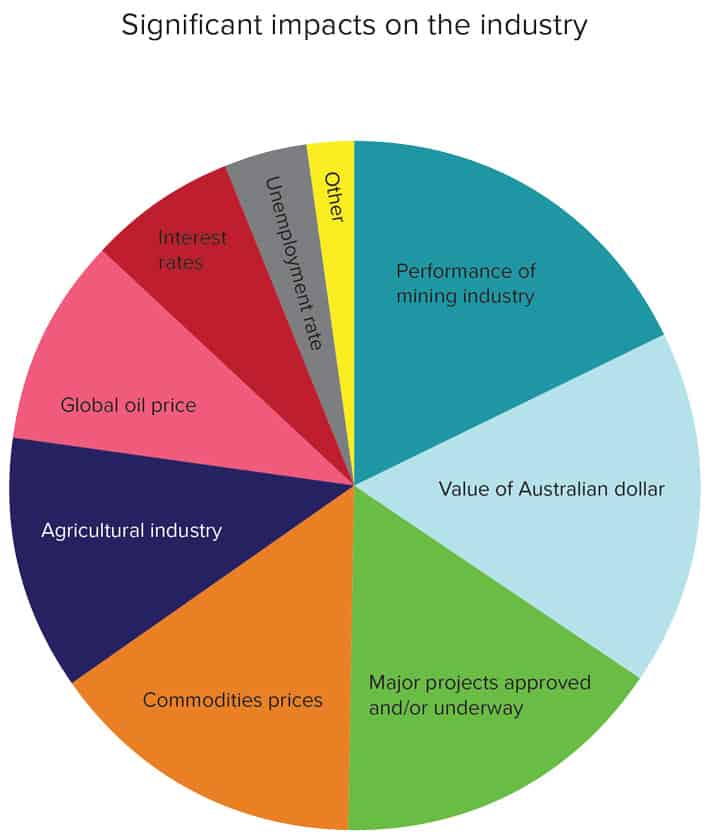 Figure 4 shows us that the performance of the mining industry, the value of the Australian dollar, the approval of major projects and the price of commodities stand out to our respondents as being the most influential over the Australian pump industry. The agricultural industry and global oil price are seen to have a similar impact on the industry, and further down the list of influencing factors are interest rates and unemployment figures.

Figure 5 provides us with interesting insights into the factors that are proving to be most challenging to navigate; and allows us to compare these to factors which are providing a positive boost to the industry. It’s clear that commodities prices, the global oil price and the mining industry downturn – three factors which are all somewhat linked – are having the biggest negative impact on the industry. On the flip side, the broader agricultural industry and the approval of major projects are seen as critical factors in improving the performance of the pump industry.

This was reflected when we asked our respondents about the key verticals they expect to drive growth in the Australian pump industry in 2016 – water and wastewater came in first, with irrigation third and building and HVAC fifth. Interestingly, while our respondents identified mining as the single vertical have the biggest negative impact on their business, they are clearly expecting things to improve in 2016, with mining identified by 41 per cent of respondents as a key source of industry growth in the year ahead. 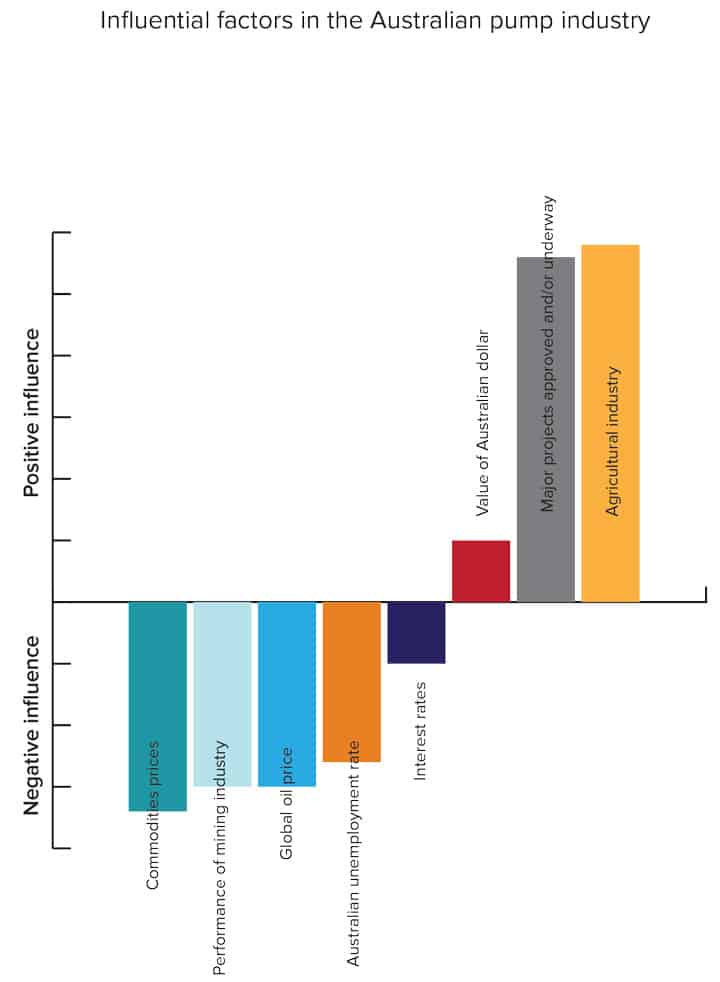 The extent to which businesses are hurting as a result of this downturn varies considerably. Responses ranged from “Massively” to “The impact hit three years ago and has stayed flat since” to “Our resellers have experienced negative growth in this sector, hence our sales have been impacted” and “Hard – thanks to our useless government’s inability to warn us about it.”

One of our hardest-hit respondents noted, “With a 60 per cent downturn in business, we’ve had to take severe action to reduce overheads…we’re in survival mode and are endeavouring to enter new markets. Unfortunately, most markets seem tough and there is a fight to the bottom going on.”

The ripple effect of the mining downturn has also been felt further afield than just companies working in the sector. “Although we only deal with the mines to a small degree, industry as a whole is affected, which has a ripple effect on us,” noted one respondent. This was a common sentiment from companies not involved in the mining industry – while they themselves haven’t been affected by the downturn, companies in the mining space have been driven into their sectors, increasing competition. “The downturn has driven mining pump suppliers into our traditional markets, and this will keep impacting us in 2016,” noted another.

One bright spot in the mining industry which several respondents commented on was the increase in repair and maintenance works being provided to the industry. In an environment where capital budgets have been cut, it makes sense that the aftermarket would record growth for the pump sector, as companies seek to maximise the performance and extend the life of existing equipment.

Noted one respondent, “Upgrades in mine sites have significantly reduced, however, maintenance and repairs are keeping the business stable in 2015.” Added another, “Capital sales have slowed greatly, however pump service work has grown.”

Also looking for the silver lining was our respondent who noted, “The downturn and need for cost savings will help remove incumbent pumps, which will help us install more of our next generation pumping equipment.”

Further at the other end of the spectrum were the companies who reported that the back half of 2015 had provided a stabilising effect for mining supplies.

“We have picked up our figures in the last six months,” noted one respondent. “If anything we are struggling to keep up with demand in mining currently.”

Some of the ripple effects from the mining downturn – including the decreased value of the Aussie dollar – are also impacting the Australian pump industry.

The drop in the dollar’s value is hitting importers the hardest, with several noting that as a result it is becoming a lot more expensive for them to import equipment, with the result being decreased margins, increased costs for customers (challenging in a low capex environment) or a combination of both.

A lack of work in the mining sector is also impacting the oil and gas industry, which in 2015 has faced the challenge of losing some of its largest customers. As a result, four of Australia’s refineries have now shut their doors, having flow on effects for the pump companies supplying those plants.

With Queensland’s CSG to LNG industry now effectively operational, supply work to this market has slowed down. Repair and maintenance work should provide a line of business to some, although this shouldn’t pick up for a few years yet.

Our respondents also believe that challenges in the mining sector have dented confidence, particularly within governments, to greenlight major projects, a traditional source of work for many in the pump industry.

The one bright spot in the area of major projects and construction remains in the housing market, where growth has been sustained in 2015 – and this is expected to continue in 2016. A steady stream of new housing estates in the major metropolitan regions (Sydney, Melbourne and Brisbane), as well as the development and redevelopment of residential areas closer to CBDs, is providing a relatively steady stream of work to companies serving these markets.

Agriculture, water, wastewater: where you need to be now The water and wastewater industries are poised to provide growth to the pump industry players in this space.

While times have been tough for those impacted by mining, commodities prices and the Aussie dollar, our respondents working in areas like agriculture and irrigation, and water and wastewater have had a solid 2015 and are expecting further improvement in 2016.

As parts of Australia enter their third year of drought conditions, operators working in the irrigation sector have received a boost to their businesses, as farmers turn to irrigation systems to water their crops with ground or bore water. The El Nino conditions currently affecting the country – which are expected to continue into 2016 – are likely to continue to support businesses in the irrigation space in the year to come.

“Sales of irrigation equipment due to drought has been the single biggest factor affecting our business in 2016,” said one respondent. Added another, “Farmers being allowed to use more irrigated water has had a positive impact on our business.” Respondents are expecting this to continue into 2016, with one respondent predicting “More deep irrigation bores and on farm recycling pumps will be installed due to reduced surface water supplies in 2016.”

Equally important to our respondents in 2016 is the impact the water and wastewater sectors are going to have on their business. Noted one respondent, “As populations increase so does demand for water and wastewater plants, as well as infrastructure and residential buildings, all of which should provide good opportunities for companies in the Australian pump industry.”

Another respondent noted that “The need for water savings will also play a massive role in years to come, with better reliability required from pump sealing technologies.”

Other respondents focused on the aftermarket as a key growth area: “With the whole market being more opex driven, the opportunities will be on the service side of the pump businesses.”

Energy efficiency continues to loom as a key growth area for our respondents. Our respondents are now beginning to identify the need for better efficiency in pumps as a key business opportunity. “Energy consumption of pumping systems will be a key opportunity area, with an emphasis on reducing operating costs versus capital cost,” said one respondent.

Added another, “Efficiency is a major factor, and we can see this trend, so optimisation of existing plant, as well as new more efficient pumps and systems are the way to go.”

While it’s been another challenging year for the industry, there have been glimpses of hope, and importantly, there’s key growth areas the smart players in the game can turn their attention too.

Adapting and diversifying will be the keys to success in 2016.

One of the biggest challenges our respondents are facing in this low-cost environment is the shift in customer thinking it has created, with many respondents noting that their customers are more focused on the bottom line than anything else when considering their pump purchased.

One respondent summed up the issue well when they said “Many end users have limited expenses to only necessary items. Purchasing for improvements, efficiency gains and total life cycle cost, are being deemed ‘nice to have’, and quotes for such products have been rejected.”

Also frustrating the industry is the fact that many customers, in the quest for the lowest price, are turning to imported products – which often don’t stand up to locally made or quality imported products.

“We’re seeing more internet sales and increased Asian brand imports,” noted one respondent. Another added, “Although the quality appears to be slowly improving,the poor quality pumps coming out of countries such as China ultimately make a technician’s life very difficult in the field.”

According to another respondent, “The low quality products flooding the market are driving the high quality manufacturers to cheapen their offerings, reducing their own quality in order to remain viable.”

For customers that are sticking with their traditional suppliers, respondents say they are finding their customers to be non-committal and capital expenditure wary. Noted one, “Customers are much slower to make decisions, and I’m finding we have many more engineers creating enquiries just to appear active.” Another agreed, even adding, “Customers are taking longer to make decisions – and then often they make the wrong ones!”

The caution in utilising funds is also resulting in a tendency to delay the maintenance of existing assets. Noted one respondent, “Customers are, more and more, running assets to destruction.”