Pumping systems are energy intensive, accounting for nearly 25 per cent of the energy consumed by electric motors, and 20 to 60 per cent of total energy usage in a number of industrial, and water and wastewater treatment facilities. While system changes in pumping requirements, normal wear and tear, and build up in pipes can lead to decreased efficiency over time, specification of the right pump for a particular application that looks beyond the initial cost is commonly overlooked, leading to long-term problems and higher than needed power costs. By pump manufacturers, end users and design engineers working closely together to properly match pump performance and system requirements, pump energy costs can be reduced by an average of 20 per cent in many cases. Here, we look at the top eight things pump users can do to improve energy efficiency.

1. Be wary of oversizing a pump

This range allows for a margin of error in case the actual resistance curve is overestimated. There are a number of reasons a pump can be oversized. One reason is that the pump is sized early in the planning and design phase using estimated values for pipework and fitting losses.

Due to the need to estimate the equipment requirements, as well as the possibility of the published literature having different reference values for flow resistance coefficient or fittings losses, there is a certain degree of error that can occur when specifying the pump.

Another reason a pump may be oversized is to account for the system design to potentially be expanded in a few years, a correctly sized pump for the current conditions would be unable to meet possible future additional  demand. Sometimes a “safety margin” will be added and a larger pump procured and installed to cater for a future expanded system.

There are a few other reasons oversizing may occur, including:

• A pump as oversized to account for expected build up of corrosion products on the pipe interior, which would increase the pump total head requirement

However, whatever the reason for oversizing, it will have the knock on effect of having higher energy costs due to a higher performance in terms of flow and pressure requiring, more power from the motor, which can lead to unnecessary energy consumption.

It is not uncommon to find applications where oversized pumps are being used, as engineers will often specify a pump with a margin of safety in terms of the pump’s duty compared to what the application actually requires.

For example, rotodynamic pumps, such as centrifugal pumps, are known to be typically oversized by 20 to 30 per cent. While some oversizing can be good to compensate for uncertainties in the design process as noted previously, a pump that will be operating as close as possible to its BEP will significantly improve its energy efficiency and reduce energy use.

An oversized pump can be identified in a number of ways, including:

• If it needs to be throttled to achieve system requirements

• Has a high bypass flow rate

• If there is excessive flow noise

• It has intermittent operation, such as pump cycling

2. Trim or replace the impeller

If a pump is oversized, rather than replace the entire pump and avoid costly operating procedures such as throttling to improve energy efficiency, a relatively cost-effective way to reduce the pressure and flow produced is to trim or replace the impeller. Trimming involves machining the impeller to reduce its diameter.

However, it should be limited to about 75 per cent of the pump’s maximum impeller diameter, and as the impeller is shaved, the clearances between it and the casing become larger, resulting in greater flow recirculation and reduced pumping efficiency if it is shaved excessively.

By trimming the impeller, its top speed is reduced, which reduces the amount of energy imparted to the pumped fluid, resulting in the pump’s flow rate and pressure to decrease. Therefore, in applications where the current impeller is creating excessive head, a smaller or trimmed impeller can improve efficiency.

Pump casings and shafts are designed to accommodate impellers in a range of sizes, and many pump manufacturers provide pump performance curves indicating how various models will perform with different impeller diameters or trims. The impeller should not be trimmed any smaller than the minimum diameter shown on the curve. 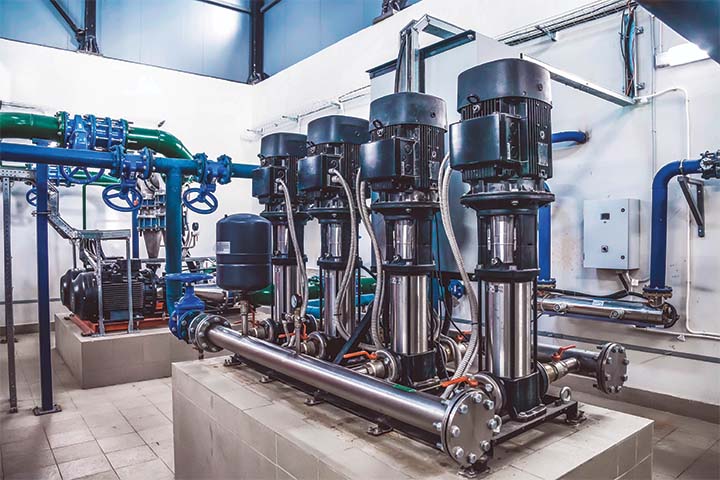 3. Use a variable speed drive (VSD)

VSDs allow the pump to operate near its BEP at any head or flow by varying the rotational speed of the motor to  achieve the actual head and flow demand of the application, rather than what the pump can produce.

One of the main reasons for using a VSD is to improve energy efficiency by reducing unnecessary energy consumption in the scenario where it slows the motor down on a pump that was oversized at the specification stage.

The second major reason for using a VSD for increased energy efficiency is where the application requires vastly differing duty demands on the pump at different times. The amount of energy that can be saved by using a VSD is dependent on the application and its requirements.

In the water and wastewater industry it can often save more than 30 per cent of energy usage; when used with irrigation pumps, power consumption can be reduced by up to 75 per cent; and when fitted to a vacuum pump for use in dairy applications, energy savings of between 40 to 63 per cent can be made. Therefore, while VSDs do come at a cost, as can be seen, in many cases the cost savings they can provide justify the investment.

An alternative to using VSDs for a system where there are multiple different duty requirements is to install multiple pumps to provide the flexibility in the flow rates that need to be delivered.

Compared to a single pump, installing multiple pumps provides the system with greater operational flexibility, it will have a higher efficiency, the system can continue to function if one pump fails, and there are lower maintenance requirements.

One of the common configurations for this setup is to install a small pump to operate low flow rates and large pumps to cope with the maximum design flow. This ensures none of the pumps need to operate far from their BEP.

However, key to achieving these benefits is correct pump selection as reliability and overall system efficiency can be compromised if the pumps are not properly selected for parallel pumping, or they are not operated in the most optimum combination.

While piping can be optimised once installed, it can be difficult to fix so it is important to spend time during the design phase of a pumping system to get it right from the start to ensure pressure drops are minimised by avoiding sharp bends and sudden changes in pipe sizes.

Low loss valves and fittings should be used and pipe selection should balance the initial cost of the pipe with the cost of pumping fluid through it, for example large pipes might be more expensive, but pumping costs are lower as there are less friction losses.

By optimising the piping, frictional pressure drops will be limited, which in turn will improve energy efficiency as the energy required by the pump to overcome such losses is reduced.

Like oversized pumps reduce the energy efficiency of the system, oversized motors can also contribute to this. There are a number of reasons an oversized motor may be specified, including catering for a possible future increase in pumping capacity, where there are load fluctuationsor voltage imbalances, and where the correct sized motor is not available when sourcing equipment.

There are options on the market to avoid oversizing the motor, with some being developed that are able to accommodate short-term overloads and therefore preventing the need to oversize.

High efficiency motors can also be installed which provide a range of benefits, including energy cost savings, reduced breakdowns from improved design and construction, and reduced sensitivity of power factor and efficiency to voltage and load fluctuations.

It is not uncommon for pumps to be operating unnecessarily, resulting in more energy being used than is needed. Installing a control system will enable the pumping systems to be controlled remotely, allowing them to be started and stopped depending on the pumping requirements at the time.

For example, where multiple pumps are in operation but only one is required for the current flow rates, the other pump(s) can be stopped and restarted at a later time when a high flow rate is needed.

Pump wear is a key area where energy efficiency is reduced, with losses ranging from 10-25 per cent. Most wear will occur in the first few years of operation and will cause a pump’s BEP to move to the left on the pump curve.

Signs of wear include cavitation, increased clearance between fixed and moving parts, wear in rings and bearings, and packing adjustment on the pump shaft. While wear is inevitable, ensuring routine maintenance is undertaken will help reduce the efficiency losses caused by wear, and slow down the wear process. This can result in energy savings between 2-7 per cent.

When the pump gets to the stage where it’s running too inefficiently and maintenance is not improving it, then replacing the pump is the best option to reduce the long-term energy costs. As well as maintaining the pump, cleaning and maintaining the pipework will also influence the energy efficiency of the system.

This article has looked at eight ways that energy efficiencies can be realised in a pumping system, however, not all points will be suitable or achieve the same amount of energy efficiency for all applications.

Any changes need to be prioritised depending on the degree of energy efficiency likely to be realised for a certain application and its individual requirements, as well as the type of pump in operation, e.g. centrifugal pumps typically have the best overall potential for energy savings compared to other pumps.