Victorians have had a love affair with gas ducted heating systems every winter for many decades. But researchers from the Melbourne Energy Institute have found that heat pump technology could displace gas heating as the tool of choice for residents seeking to warm their homes in the cooler months.

The Melbourne Energy Institute recently conducted a study into declining gas demand in Australia, identifying a range of key factors which are influencing users to turn away from gas.

One of the key factors they found was the fact that in the buildings sector, gas faces increased competition from efficient­ electrical appliances that utilise heat pumps.

In eastern Australia, there are potentially 500,000 to 1,000,000 homes where residents are unaware that they can immediately start to save hundreds of dollars per year on their space heating bill. To do this, they need to turn on their existing reverse­-cycle air conditioner (RCAC) heat pumps and turn off their gas.

What is economic fuel switching?

Economic fuel switching is the concept where gas consumers switch to using electrical appliances for their space heating, water heating, cooking, and possibly other heating needs.

Residential fuel switching from gas to renewables-­based electricity, in concert with energy­efficiency measures, was proposed by Beyond Zero Emissions in 2013 as a way for homeowners and commercial building managers to reduce greenhouse gas emissions and move to 100 per cent renewable energy.

In 2014, ClimateWorks likewise suggested fuel switching from gas to renewables­-based electricity was key to a deep de-carbonisation scenario.

Refrigerators and most home air conditioners are heat pumps that use a refrigeration cycle to move heat “uphill”, in a sense, from a cold location to a warmer location.

An RCAC operating in heating mode is essentially recovering free renewable ambient heat (a form of solar energy) from the air outside of the building, raising the temperature of that heat, and shifting it to inside the building.

In so doing, RCACs, with efficiencies of over 500 per cent for top-­of-­the-­line models, are far more efficient and have lower operating costs than simple electric-­resistive heating devices (fan heaters, oil column heaters, panel heaters, etc.) that achieve efficiencies of only 100 per cent, and also have superior efficiency to gas­fired heaters that are limited to efficiencies of less than 90 per cent and perhaps as low as 50 per cent or less.

In 2014, the Grattan Institute found that following an increase in wholesale gas prices of $5 per gigajoule, typical Melbourne, Sydney, and Adelaide homes can save $1,024, $628, and $517 respectively on the combined running ­costs of space heating, water heating and cooking if they switch from gas to efficient­electric appliances.

A study conducted by the Alternative Technology Association (ATA) looked into the savings householders around Australia would see by shifting from gas heating appliances to RCACs.

The largest savings identified apply to a large house in Canberra ($1,733 per year). A large home in Melbourne might save $658 per year.

In every case, heating with an RCAC involved lower running costs. In no region or home type was gas heating found to be the cheapest option.

With respect to current space heating practices in eastern Australia, MEI have identified that there may be between 500,000 and 1,000,000 homes (particularly in Victoria) where RCACs have already been installed, but the householder is not aware that using the RCAC in winter can be the cheapest way to heat their home (i.e. instead of using their gas heating).

Were the householder to be informed of the possibility of savings, he/she might opt to switch off their gas heating, switch on their RCAC, and start saving money immediately.

For many householders, this will be news. This is because gas heating has traditionally been seen as the cheaper option in Victoria.

As described by the ATA, homeowners lack the knowledge that the economics of space heating have changed. Gas appliance marketing can often mislead consumers.

The ATA recommends that it is necessary to “strengthen the regulatory oversight of the marketing of gas as cheaper and more efficient than electricity”.

Across eastern Australia, the amount of money that householders can save by using RCACs for heating instead of gas may be very large. For example, were 500,000 Victorian households able to save $500 per year, this adds up to a savings of $250 million dollars per year.

These new space­-heating economics have come about because of:

Heating cost savings achieved by using an RCAC instead of gas will depend on the effectiveness of the gas and electrical appliances being compared in delivering heat to where it is needed, the electricity and gas prices that consumers are able to negotiate with their suppliers, as well as comfort and convenience preferences.

Ducted gas space heating is the practice of using one central gas­combustion heater fitted with an air blower and a network of ducts (either under­floor or in the attic space) to carry warm air to the majority of rooms within a house.

Around 40 per cent of homes in Victoria and the ACT use ducted gas space heating, whereas in no other eastern Australia state does its prevalence exceed 4 per cent.

As with any gas heating system, some of the energy contained within the purchased gas is lost in the hot flue gases. Additional heat is lost from the ducts by the mechanisms of conduction, convection, radiation and air leakage.

Under­-floor ducts often go un-inspected for decades and yet can suffer damage from animals, children, or under­-floor maintenance or renovation activities.

These losses can be exacerbated if internal doors block the flow of air back to the heater air intake. Lastly, ducted systems may direct heat to rooms where heat is not needed.

The practice of closing a limited number of hot air registers in unused rooms is often recommended, but this has the side effect of over­-pressuring the ducts upstream of the closed registers which then increases warm air leakage.

The efficiency of ducted gas space heating systems in Australian homes can be as poor as 50 per cent or less.

In other words, in some homes half or more of the gas purchased for space heating is, in a sense, immediately wasted and not used to effectively warm people in their homes. 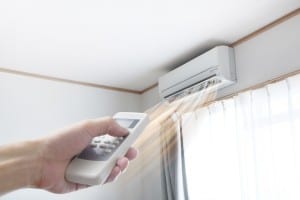 Reverse cycle air conditioners, when used as heating devices, can save homeowners considerably.

Contrasting with the potentially poor performance of ducted gas, some non-­ducted RCACs achieve efficiencies of more than 500 per cent when they capture up to 4.8 units of free, renewable ambient heat from the outside air for every one unit of electricity applied.

If the RCAC wall unit is located in the room directly where heat is needed, energy losses are minimal.

RCACs are a disruptive technology and are already very significant harvesters of renewable energy in Australia, exceeding rooftop solar photovoltaic (PV) panels in their energy recovery/production.

In 2014, the renewable energy recovered by RCACs exceeded that of rooftop solar PV. In the coming years, RCAC-­recovered renewable energy has the potential to double, as more buildings in Australia (and in particular in Victoria, as described above) adopt this method of space heating.

All of this provides a huge opportunity to the pump industry, and to the HVAC sector in particular. The challenge will be educating consumers about the benefits that are available to them – but it’s one that the industry shouldn’t shy away from.

RCACs as residential heating devices is a new concept, particularly in Victoria, but it is a concept that ties into desires for reduced bills and enhanced energy efficiency. It’s time to encourage users to embrace the opportunities.