The $380,000 project was completed by the council with funding secured through the NSW Government’s Water Security for Regions Program.

“The project was initiated following the complete failure of the supply in January 2007. Water was carted for 3 months continuously from Quirindi during the supplies failure at a cost of $31,000. Several options for drought proofing Wallabadah were investigated, including a pipeline from Quirindi, however an alternate groundwater source was settled on due to the large savings in cost and the availability of deep fractured rock groundwater being confirmed with test bores drilled and tested during the drought,” Councillor Hope said. 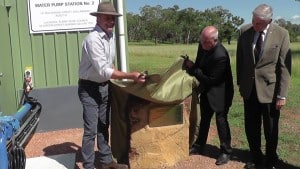 he old supply during the recent dry weather predicted it would fail again by early 2015 so Council pursued the completion of this project, as a priority, to head off such an eventuality. LPSC applied for funding in June 2014 following completion of the design and cost estimates. The new Wallabadah supply is now ready to provide water once the NSW Office of Water provides Council with a licence to extract,” he continued.

“The project was completed on time, in under 5 months. Recent rains have eased the total failure scenario we anticipated however the project has been driven forward to ensure security to residents. On behalf of Council and residents I thank and congratulate LPSC’s Works Department Director, Greg Tory, and the Water Services works team under Water Services Manager, Rod Batterham, and Water Services Engineer, Luke Whitten, for the professional way they have carried this project to completion,” he said.

“This project is one of two successful projects LPSC gained funding for through the NSW Water Security for Regions Program. We also were successful in attracting $4,825,000 for the Willow Tree pipeline project which is currently under tender assessment,” Councillor Hope concluded.