What to upgrade in process pump power frames (part 1) In the over six decades since 1960, hundreds of papers, articles, and conference proceedings have been published under the broad classification “process pump improvements”. However, most of these have addressed improvements in pump hydraulics for reasons of initial cost reduction and enhanced pump efficiency. Pump marketers have always been aware of this because pump buyers use these two parameters to decide which pumps to buy. Regrettably, these selection priorities lead to “benign neglect” of the power ends of process pumps, although a few books have documented how and why the power ends (bearing frames) deserve considerable attention¹²³. This article gives a few pointers on how to obtain improved power ends. The generic bearing housing cross-sectional view of Figure 1 makes a compelling case for pump upgrading. It contains at least five vulnerabilities and risks that are unacceptable to best-of-class users:

a. Oil rings (“slinger rings”) are used to lift oil from the sump into the bearings. Yet, under certain adverse conditions, these oil rings will malfunction¹. We should make an effort to understand how and why oil rings tend to malfunction².

b. The back-to-back oriented thrust bearings are not located in a cartridge. However, cartridge mounting will facilitate upgrading from high-risk, loose-running oil rings (slinger rings) to low-risk flinger discs. Flinger discs are secured to the shaft and will pick up oil even if the pump shaft system is at slight angles.

c. Bearing housing protector seals are missing from this picture. Not using bearing protectors or installing an inferior type of bearing protector will decrease bearing life. The incremental cost of a well-designed product often pays for itself in a mere few weeks of ownership.

d. While the bottom of the housing bore at the radial bearing shows the desired oil return passage, the same type of oil return or pressure equalisation passage will be needed at the six o’clock position of the thrust bearing. Without a drain hole, trapped oil will overheat and become viscous tar or black coke.

e. There is uncertainty as to the type or style of constant level lubricator that will be provided; unless specified, the best one (with pressure equalisation) is rarely found on new pumps.

In addition to the more widely publicised hydraulic selection criteria, each of the above mechanical or power-end issues merits further explanation and will be discussed next. The considerations are confined to lubrication issues on process pumps with liquid oil-lubricated rolling element bearings.

A majority of process pumps in use today fall into the oillubricated rolling element category (small pumps with greaselubricated bearings and large pumps with sleeve bearings and circulating pressure-lube systems are not included in this discussion).

It has been estimated that 25 per cent of all failures are preventable, but not prevented because of an arbitrary decision that is simply not rooted in knowledge and experience. For example, a decision to use the cheap oil may overlook the fact that cheap oils often lack demulsifiers, or anti-foaming agents, etc.

Warding off ‘black oil’ requires close observation of possible contributors. Black oil can be attributed to approximately 15 per cent of all failures that are predictable, but not predicted. For example, the random appearance of ‘black oil’ is attributable to O-ring degradation of a certain style of bearing protector seal.

The bearings will soon fail but nobody has read the books and articles that describe the occurrence (the occurrence should be linked to a certain risky design feature on a widely used product). Or, as was shown in Figure 3, oil is trapped behind a bearing.

Bearings, lubricants, and lubricant application methods all merit close attention. It is important to realise that, whenever gaskets, bearings, seals, shafts, housings, or any of the many thousands of other equipment components fail, the underlying causes are always found in one or two of four mechanisms described by the acronym ‘FRETT’, meaning force, reactive environment, time and temperature.

Knoxville (TN, USA)-based company System Improvements has made FRETT the core of a potent and popular troubleshooting and failure analysis training course called ’Equifactor®’. Whenever there is a deviation from normal, say black oil is found in a bearing housing, at least one of these four failure mechanisms will have contributed to the seemingly random and often very sudden appearance of darkened lubricant. Equifactor® rather quickly zeroes in on the root cause of this, and many other often elusive deviations. 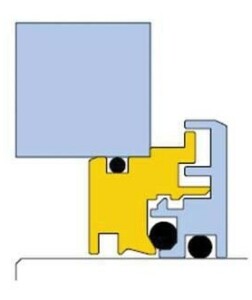 While black oil has been studied in the past, the underlying causes seem to have remained hidden from many researchers³. An oil analysis will uncover contaminants that are either carbon (overheated oil) or particles of elastomeric O-rings that have frayed or decomposed for some reason.

In any event, one will have to find and eliminate the source of the black residue. Black oil inevitably originates either from overheating the oil or is due to O-ring damage². Both deserve much more attention.

Among the more elusive reasons for overheated oil, we find oil ring slippage and also degradation of a so-called ‘dynamic O-ring’ that is placed between the rotating and stationary components of a bearing protector seal. Common sense and experience are of great value here; accordingly, a preview of bearing housing protector seals is enlightening.

Bearing protector seals with O-rings contacting a generously contoured area (lower part of Figure 2) are obviously less likely to undergo O-ring degradation than products designed with a sharp groove opposite the O-ring.

In addition, axially or diagonally moving O-rings are clearly superior to O-rings designed to move radially. Some designs also risk encountering the sharp corners of an O-ring groove.

Part 2 of this article will appear in the next edition of Pump Industry.